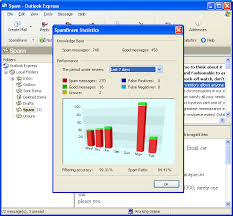 Bayesian spam filtering is the process of using Bayesian statistical methods to classify documents into categories.

Bayesian filtering was proposed by Sahami et al. (1998) and gained attention in 2002 when it was described in the paper A Plan for Spam by Paul Graham. Since then it has become a popular mechanism to distinguish illegitimate spam email from legitimate email. Many modern mail programs such as Mozilla Thunderbird implement Bayesian spam filtering. Server-side email filters, such as SpamAssassin and ASSP, make use of Bayesian spam filtering techniques, and the functionality is sometimes embedded within mail server software itself.

The advantage of Bayesian spam filtering is that it can be trained on a per-user basis.

The spam that a user receives is often related to the online user’s activities. For example, a user may have been subscribed to an online newsletter that the user considers to be spam. This online newsletter is likely to contain words that are common to all newsletters, such as the name of the newsletter and its originating email address. A Bayesian spam filter will eventually assign a higher probability based on the user’s specific patterns.

The legitimate e-mails a user receives will be tend to be different. For example, in a corporate environment, the company name and the names of clients or customers will be mentioned often. The filter will assign a lower spam probability to emails containing those names.

The word probabilities are unique to each user and can evolve over time with corrective training whenever the filter incorrectly classifies an email. As a result, Bayesian spam filtering accuracy after training is often superior to pre-defined rules.

It can perform particular well in avoiding false negatives, where legitimate email is incorrectly classified as spam. For example, if the email contains the word “Nigeria”, which frequently appeared in a long spam campaign, a pre-defined rules filter might reject it outright. A Bayesian filter would mark the word “Nigeria” as a probable spam word, but would take into account other important words that usually indicate legitimate e-mail. For example, the name of a spouse may strongly indicate the e-mail is not spam, which could overcome the use of the “Nigeria.”

Some spam filters combine the results of both Bayesian spam filtering and pre-defined rules resulting in even higher filtering accuracy. Recent spammer tactics include insertion of random innocuous words that are not normally associated with spam, thereby decreasing the email’s spam score, making it more likely to slip past a Bayesian spam filter.

Bogofilter is a mail filter that classifies e-mail as spam or ham (non-spam) by a...

Markovian discrimination in spam filtering is a method used in CRM114 and other spam filters...